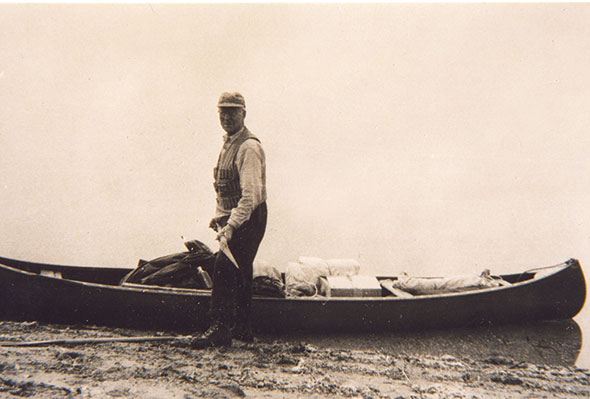 I enjoy reading your paper, especially the photos and information about the old timers. I hope you will find space to print the enclosed photo and profile of one such early day resident, a good friend and fishing companion, Samuel Hope Brewer.

Hope was born at Perry Creek which is south of Kimberley, on May 30th, 1886. He was the first white child to be born in the East Kootenay. At that time, his father Samuel, a placer miner from Wisconsin, was working a gold claim on the creek. From Perry Creek, the family moved to Josephs Prairie (now Cranbrook), where the father managed Colonel Bakers ranch.

In 1888, they moved to Fairmont where Sam had purchased a ranch from George Geary. On this property, he built a two-story log building for use as a stopping house. It is still there and can be seen from the main highway.

Fairmont was sold to J.B. Hanky and, in 1909, the Brewers moved to the Chamberlain Ranch, north east of Windermere (Swansea Ranch). Sam Brewer died in 1921 and his son, Hope, took over the ranch. In 1916, he had married Mrs. John Spencer, a widow whose late husband had ranched at Finlay Creek. Hope sold the ranch to Alec Ritchie and went to work in Kootenay Park where, for ten years, he was the warden at Marble Canyon. Prior to this move, a son, Carl, had been born. He pre-deceased his parents in 1967. His son Russel lives in Cranbrook.

In 1936, the Brewers left Marble Canyon and moved to Invermere, where they had purchased a small house. Nellie passed away a few years before Hope, so he continued living in his own home. His close neighbour, Gunner Jorgenson, kept track of him and also made some improvements to his living quarters by installing inside plumbing.

On September 28th, 1971, Hope and I had a day of fishing at Langs Lake. We each had our own boats, eight-foot dinghies. Although Hope was 85 years old, he was quite active and always caught the most fish. On that day, he landed nine nice rainbows, all taken with a fly and spinning tackle. We were late getting home so didnt unload the boats. The next morning, on taking him his boat, I found him laying on the kitchen floor. Dr. Duthie came with the ambulance as the old fisherman had suffered a heart attack. Taken to the hospital, he made a good recovery, but had a second and fatal attack on October 13th.

Over the years, a few bits and pieces have been written about the Brewer family and published in The Valley Echo. Some of their early life at Fairmont was most ably recorded by Janet Wilder in her book, The Legacy of Fairmont Hot Springs.

Hope was a colourful character who was able to tell many interesting stories of the early days of his life in this valley. A true pioneer.

A FISHERMANS FRIEND Hope Brewer stands by a canoe in Taynton Bay (now known as Kinsmen Beach) circa 1950.Photo Submitted