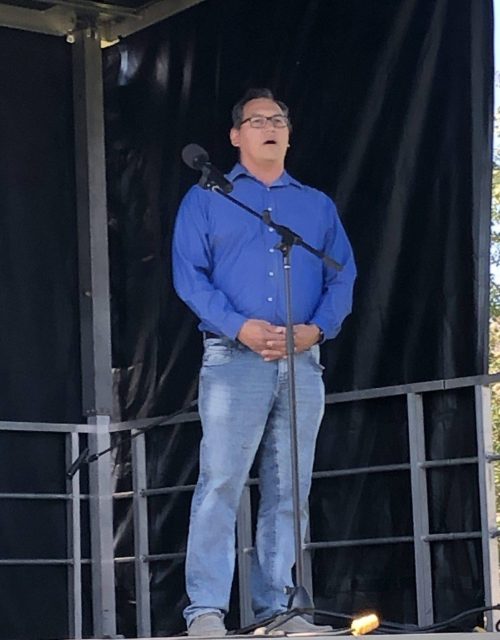 Chief Donald Sam of Akisqnuk First Nation, is seen here speaking at this year’s Salmon Festival. Chief Sam is also recognized as a prayer leader for Ktunaxa people. He spoke at the Pope’s visit in Edmonton this past July. Photo by Chadd Cawson

Pope Francis made his first trip to Canada on July 24 under the theme of ‘Walking Together’, when he aimed to address his heartfelt condolences at stops in and around Edmonton, Quebec City, and Iqaluit.

“I think his visit was a step in the right direction,” said Chief Barbara Cote of the Shuswap Band in Invermere. “We had the Prime Minister Stephen Harper apologize in 2008, and now the Pope. Although, we still haven’t seen recognition from the Monarchy, who also had a role to play in the genocide of our people across Canada and throughout the world. Apologies like this bring up the conversation of reconciliation, and I think that is important.”

According to the National Centre for Truth and Reconciliation, current numbers show that over 4,100 children died, and/or were abused, neglected, and suffered from disease and malnourishment during their times in residential schools. The 85-year-old Pope, who suffers with knee pain and sciatica, started off his visit meeting with residential school survivors at the Ermineskin Indian Residential School in Alberta before attending an Indigenous church in downtown Edmonton. Chief Donald Sam of the Akisqnuk First Nation, who has been recognized a prayer leader for Ktunaxa people for years, made the trek to Edmonton to attend and speak. His sister, Michele Sam, who participated in a sub-committee for the papal visit, indicated the significance of the minority. Chief Sam participated in this event alongside Elder, Alfred Joseph.

“My duties in leading prayers including funerals and memorials, includes praying the rosary in the Ktunaxa Language. The Ktunaxa language is a critically endangered language as it happens to be a language isolate, not related to any other language,” said Chief Sam.  “It was an absolute honour to present the Ktunaxa people and our unique language. It was an opportunity to come together and bear witness, and perhaps also build on our own journey of healing and reconciliation.”

Chief Sam shares he is still very conscious of the disparity that First Nations people have experienced in Canada. While he felt honoured to represent the Ktunaxa people at the papal visit and while it was spiritually significant, he describes his own spirituality as something different.

“My connection to a spiritual place is perhaps more Ktunaxa spirituality- more Qat?muk. It is not recognized by Canada, including the supreme courts –  where a ski resort developer was given more rights over Ktunaxa Spiritual Rights,” he said. “My belief in a higher power- in the holy trinity, or in the creator allows me to sing my songs- Catholic or Spirit, and to say my prayers- in a church building or in nature, at a waterfall. I wish for ?akisq?nuknik? to be free to believe in a higher power, not be bound by the pain of the untold truths of the past, but driven by the spiritual wisdom of our ancestors. It is my hope that the Pope’s visit advances the truth finding of Canada. This is what will lead to reconciliation, not just on one day but over the coming years. It is my hope that the tragic history of genocide can be known as the horrific epoch that we have learned from, and we make amends and one day our hearts can lead as one.”

All hearts did not feel the same. Many were upset that the Pope’s tour missed British Columbia completely, where the 215 unmarked graves were uncovered in Kamloops, which many believe inspired this long overdue action on the Pope’s part. His visit left mixed reactions for many, such as residential school survivors and Secwépemc (Shuswap) First Nation Elders, Basil and Laverna Stevens.

“For me, it was too little too late, said Basil. “He should have come out ten years ago when we first started talking about it. The Pope should have then realized he should go to Canada and smooth out some of these ruffled feathers. But like anything else, they wait until it comes to the very, very end, when push comes to shove and they get pushed into the corner, and then the thought comes that something should finally be done about it. We really didn’t think too much of the Pope’s visit. The real blow was for someone to give the Pope a headdress. Those are earned in a different way not by leading a bunch of people that were behind years of abuse.” Laverna added,, “Not to mention covering up what they did. It was kind of like a slap in the face.” 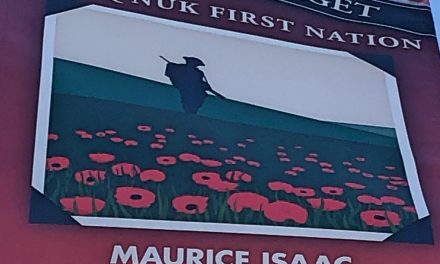 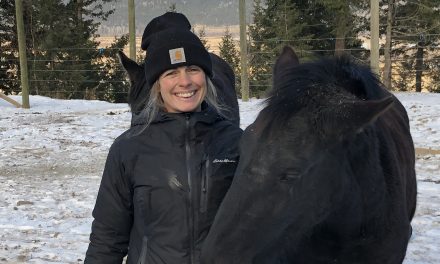 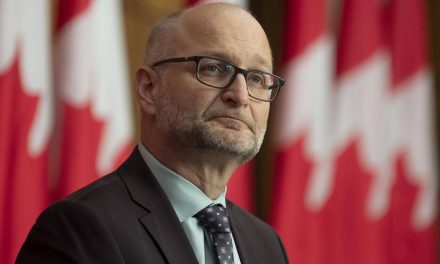 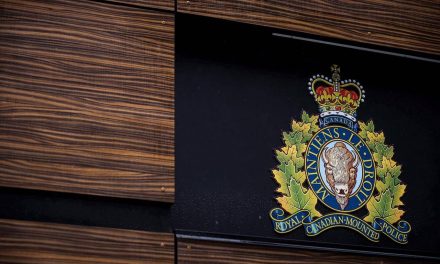