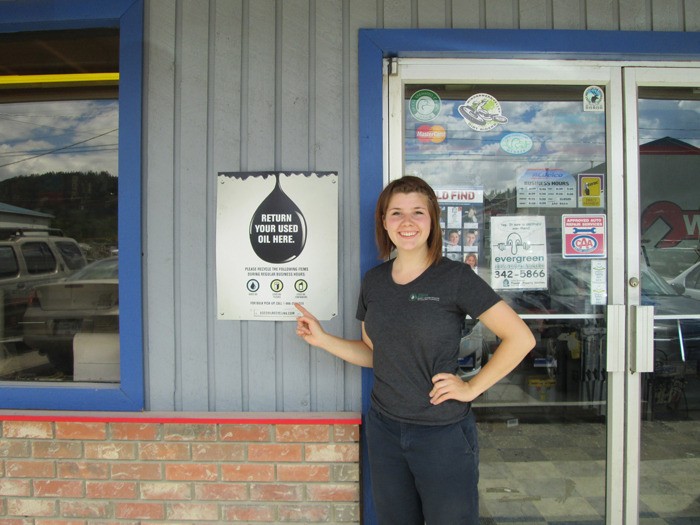 Over 18 million litres of used oil do not get recycled in British Columbia each year. Instead of getting recovered by the BC Used Oil program, it winds up in landfills and is extremely hazardous to drinking water and the environment.

As part of its ongoing public education outreach efforts, the British Columbia Used Oil Management Association (BCUOMA) has launched its seventh annual Summer Ambassador Program and on June 12, the program’s two-person ambassador team paid a visit to Invermere to promote the recycling of used oil and antifreeze.

“The goal of the program is to generate public awareness to keep these hazardous materials out of our drinking water and landfills,” said BCUOMA account manager Amelia Thorn.

Ambassadors Emily Louie and Ali Omelaniec dropped into Walker’s Repair Centre in Industrial park, Jepson Petroleum on Panorama Drive and Lakeside Auto in downtown Invermere — the three Invermere locations that have registered with the BCUOMA. There, they conducted surveys about the used oil program, registered any questions or concerns, and put up posters reminding customers that recycling services were available on site. The BCUOMA is a not-for-profit organization responsible for the implementation of a province-wide recovery and recycling system for used oil, antifreeze, and their respective filters and containers.

“They want to make sure that the program is running smoothly for them,” Thorn said.

Because antifreeze was added to the used oil program just last July, the ambassadors are also using their survey tour to let the facilities know that once they call the BCUOMA to register for the antifreeze component, it can be added to their list of acceptable products for recycling, for which they receive collection payouts.

“They come every year and they just make sure that we’re still in the used oil recycling program, and we have been for the five years that I’ve been here,” said Jepson Petroleum office administrator Susan Kelly.

The BCUOMA team will be travelling to over 120 municipalities and over 500 recycling facilities throughout B.C. this summer to spread their message of: “One drop makes a difference.”

The organization also partners with three other stewards — the Electronics Association (defined as anything with a cord or battery as of July 1, 2012), Product Care (paint, lightbulbs, etc.) and the Medications Return Program (to encourage proper disposal of old medications, not flushing). For more information about BCUOMA and a listing of collection facilities across the province, please visit www.usedoilrecycling.com. The ambassadors’ progress can be tracked throughout the summer on their blog at www.bcusedoil.com.