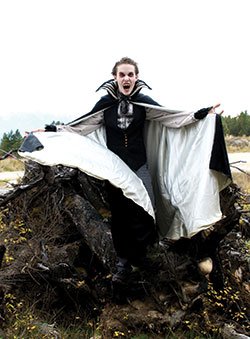 CLASSIC COUNT DTSS Grade 12 student Japhy Hunt has been cast as the lead in a Dracula production that is giving local drama students the opportunity to try serious acting and really sink their teeth into their roles.Photo by Vanessa Jeakins

David Thompson Secondary School (DTSS) theatre students are eager to perform a unique play based on the characters of the classic Dracula.

This performance is a class project for the senior theatre class and the cast and crew includes 19 students, said Shelley Little, English and drama teacher at DTSS. The students actually chose this play last year as one that they really wanted to perform for Halloween. Its an adaptation of Dracula by John Mattera. I had to ask Mr. Danyluk, the principal, to change the schedule and put the Senior theatre class into the first semester instead of the second, when it usually falls, so that we could do this. Then we jumped right into planning on the first day back in September.

Choosing this genre challenged theatre students to move beyond comedies and work on a serious production.

The biggest challenge has been to strike the right tone to make it a serious and believable horror, without allowing it to become melodramatic, said Ms. Little. It would be easy to make it a spoof of a thriller by playing it up and making it ridiculous, but we really wanted to stay true to Bram Stokers original concept of Dracula as a mysterious, centuries-old vampire with an unquenchable thirst for blood.

We really wanted to show the chilling complexity of his character, too, as hes not just a monster, but a tortured and lonely creature.

Grade 12 student Japhy Hunt has been cast as Dracula in this years production and is eager to try a new aspect of acting.

I enjoy the challenge that the play brings, how the Victorian setting is visually portrayed through all elements of the set, and the moments when we work in collaboration to make the play come together, said Japhy.

His co-star, Melissa Weber, will be playing Mina Westenra beside Japhy. Melissa said that working on the show since September has helped the entire cast make progress both as actors and as a team.

She is satisfied with the finished production and ready to give the Columbia Valley community a taste for the classics.

My favourite part of this production is getting to know and work with all the new additions to the class, and to see all the progress day by day when working in such a tight time frame, said Melissa. We are trying to acquire a strong emotion of fear and uneasiness from the audience. Its easy to drift off of a certain charisma when acting, considering we have only recently done comedy-based productions.

Ms. Little has also helped the cast develop make-up, costumes, props and backdrops for the production.

I love the costumes as weve had so much help to make it look as authentic as possible and capture the original Gothic classic aura, she said. Athena Hunt designed some beautiful vampire costumes we were able to borrow vintage Victorian era suits for the boys from Fort Steele and local dentist Dr. Pat OSullivan has been making custom fangs for the vampires.

Ms. Little and the DTSS students want to thank the community for all their efforts to make this performance a success.

Putting together a production like this is such a collaboration, said Ms. Little. Im so grateful to everyone who has helped us and inspired by all the talent among the students that we are able to tap into. Dawson Ragan, for example, has done some beautiful artwork painting our backdrops for the set. Also, some of the students in Ms. Bobby Wrights shop class have helped us by building a coffin and I have new Grade 10 students learning the lighting and sound systems.

Tickets are available at the Blue Dog Cafe or at DTSS for $10 for adults and $5 for students. Ms. Little does not recommend the show for young children.