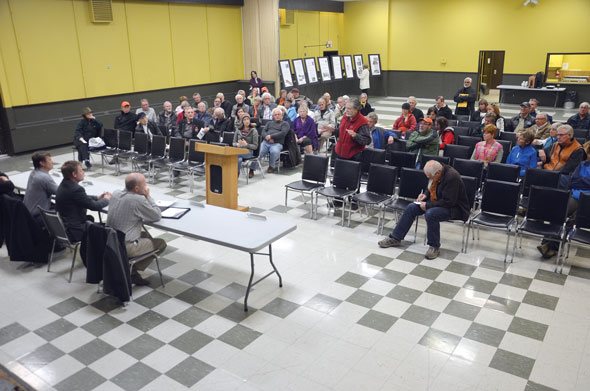 TALK OF THE TOWN Invermere resident Brian Fenerty poses a question to mayor and council at Tuesday’s town hall meeting for local residents to learn more about the District of Invermere’s plan to borrow up to $5.6 million for a proposed new community centre. The question will go to a citizen referendum on Saturday, November 2nd, with two advance poll opportunities available before that date.Photo by Greg Amos

Theres little debate towards the desire for a recreational community centre in the valley, but the District of Invermere will have a hard time making everyone happy.

At a town hall meeting held at the Invermere Community Centre on the evening on Tuesday, October 15th, local residents considered whether to borrow up to $5.6 million for a new community centre.

The proposal to borrow doesnt come frivolously, as the aging facility where the meeting was held is facing several structural problems.

One Invermere resident felt that communities outside the district were paying too little at 18 per cent, and said if that if the rest of the valley ends up paying nothing, then they should charge outsiders to use the facility.

Eighteen per cent? Is that the best you can do?, he asked. Mayor Gerry Taft said Invermere only pays one-third of the operating cost of Eddie Mountain Memorial Arena, but its safe to say that the community benefits more than one-third, thanks to support from the Regional District of East Kootenay. Mr. Taft said he worries that if we nickel and dime the community on this one issue, it could hurt us more in other aspects. It balances out, he said.

Councillor Greg Anderson said that Cranbrook charges non-Cranbrook residents for use of its facility, and its a nightmare.

That sparked another question will the land occupied by the existing community centre be sold and attributed towards the cost of the new facility?

It will not; Invermere wants to make sure the

Councillor Greg Anderson said that council will not fall on their swords if the referendum fails, and wont make further attempts to erect a new facility, but will almost definitely spend $2 million on repairs to the existing facility.

But if we upgrade this place, we can forget about a new facility for a long time, he added.

One man in the crowd of roughly 50 people was worried about where the district had adequate resources on hand in case a more essential cost is burdened, such as sewer

He was assured that more than $10 million is held in designated accounts for those risks.

Councillor Justin Atterbury said that it can seem silly to borrow $5.6 million and pay interest when you have about double the amount on hand, but they store it for those unexpected bills.

The 30-year interest rate will be locked in for the entire term its borrowed, because the B.C. Municipal Finance Authority has great credit rating, and currently charges 3.85 per cent interest, he explained. Council expects little to no rise to that percentage by the time they would be prepared to take the loan.

Because hoping for grants is wishful thinking, Invermere is not counting on them, but Mr. Taft said that grants will be far more likely to come if the loan is approved.

Gurmeet Brar said he found the date of the referendum peculiar, because many property owners will not be in town during the shoulder season.

Mr. Taft disagreed that the timing was peculiar, and said that democracies are run by those who show up.

Mr. Brar said he also felt as though the project was moving too fast, and that the new location will not be easy for people to walk to from downtown.

Councillor Paul Denchuk said that it may seem to be moving fast, but if the project were moving more slowly, the community would risk losing its present hall and being left with no place to gather.

Mr. Atterbury said the building designs will be largely shaped by the next council, and Mr. Taft said that it may very well become an election issue. 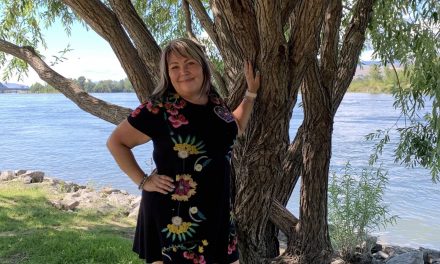