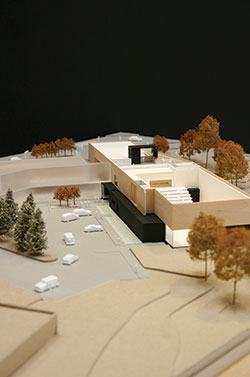 The 3-D model of the Community Centre.

The community is being encouraged to help secure $1.5 million in funding over the next two years to help house a string of community groups and non-profits under one roof in the highly anticipated Columbia Valley Community Centre.

The District of Invermere (DOI) has secured $7 million for the base building and landscaping costs of the project through internal revenue and reserves as well as the Regional District East Kootenay (RDEK), but its only one part of the process.

The Fundraising Committee for the Columbia Valley Multi-Use Facility will be working towards reaching the $8.5 million total cost of the project through a series of fundraisers to acquire items such as tenant improvements for the library, theatre-style seating, curtains and lighting, AV equipment, room partitions, a sound system and items for the kitchen.

The district has secured the following funding $5.6 million from our borrow, $625,000 over five years from the RDEK, and $800,000 from other miscellaneous sources, including internal revenue and reserves, said Chris Prosser, DOI chief administrative officer. The fundraising is a key component to increase the functionality and to meet the needs of specific user groups including CV Arts and the library and to provide for potential conference services as well.

The Columbia Valley Community Centre will be constructed at the old location of the David Thompson Secondary School, which was knocked down roughly a year ago. Shape Architecture principal architect, Alec Smith, unveiled a 3-D model of the approved design, and colour-coded plans and images, for roughly 70 people at a June 16th open house held at the Invermere Community Hall.

He has been busy working in conjunction with the Multi-Use Facility Advisory Committee to help build a framework for the recreational activities and events that will take place within the planned centre.

The exciting part of the fundraising is that it is not for the base building, but rather for nice-to-haves and for equipment and furnishings that can take the facility to the next level in performance and enjoyment capabilities, said DOI mayor Gerry Taft. For people who donate, they will see the direct impact of their contribution in very visible and functional components, like lighting and sound systems and retractable theater seating, et cetera.

The construction of the facility is occurring with or without the fundraising component being successful, but we are very confident that the community will take ownership over the project and a substantial amount of money will be raised by the time the building is ready to open in the fall of 2017.

There is still hope that the final cost of the project could decrease once the tenders are submitted by general contractors.

We remain hopeful that the price will decline to allow for funding to be directed to other initiatives within the building, explained Mr. Prosser.

For more information about the events, project or fundraiser, visit www.columbiavalleycentre.ca.