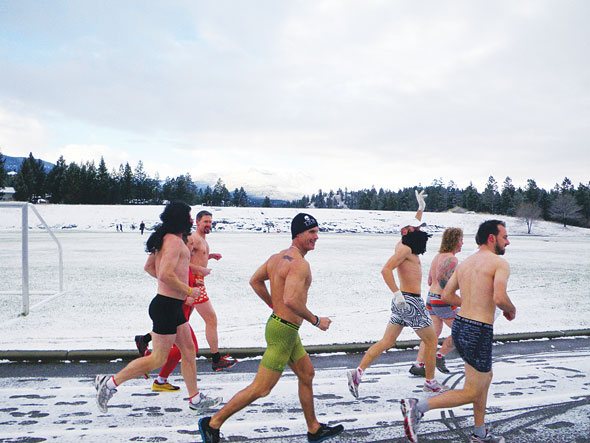 On its first birthday, the Movember Mile may not be old enough to grow its own moustache, but everyone including runners who can grow hair on their upper lip is invited to the second annual Movember Mile presented by Crazy Soles.

On Saturday, November 30th on the David Thompson Secondary School athletic field, runners are invited to run a mile (1.6 kilometres), but theres a catch pants are forbidden and moustaches mandatory.

We ask runners to show up in their best and flashiest boxers or underpants and run a mile, said Crazy Soles owner Beva Kirk. And although one gender is able to grow facial hair with more ease than the other, the event is open to both men and women. Even if you dont have a moustache, well have stickers, Beva said. Or if you want, you can put a wig on your face.

The event is open to participants of all fitness levels. Last year, some entrants ran a mile for the first time in their lives, Beva said. They were sore for a week after, but pledged to return to the Movember Mile.

The one-mile run requires runners lap the DTSS track about four times. Registration begins at 10:30 a.m. and the event starts at 11 a.m. In lieu of an entry fee, participants are asked to make a donation to the Movember Foundation, which 100 per cent of Movember Mile proceeds will benefit.

Come on out with your bright and fancy underwear and wear your real or prosthetic moustache, said Beva. All you need to do is show up walk, skip, jog whatever!

The run is expected to conclude by 11:30 a.m., at which point there will be photos and an awards ceremony.

These local man are proudly growing mustaches for Movember, and as you can see, some have a head start.Above: College of the Rockies employee Dennis Klim. Photo by Dan Walton