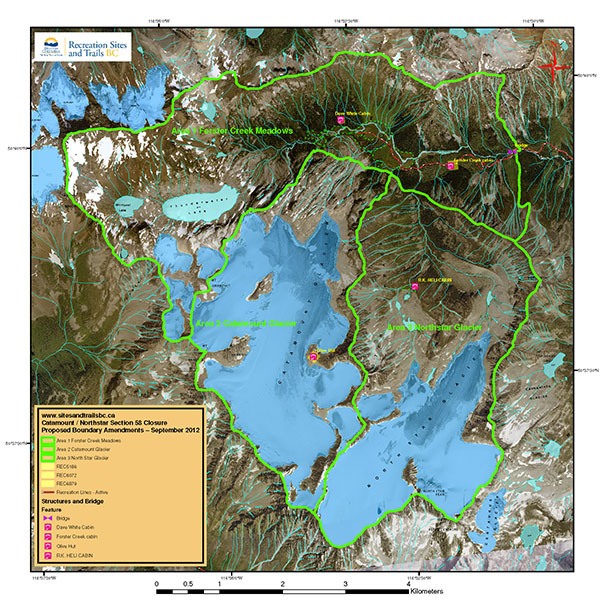 The Forster Creek drainage area, about 45 kilometers northwest of the Village of Radium Hot Springs, has long drawn snowmobilers, backcountry skiers, climbers and hikers, but as the area’s popularity has increased in recent years, so too have the user conflicts.

The province recently issued a reminder to Upper Columbia Valley residents about new restrictions on use of motorized vehicles in Forster Creek area that came into effect June 1st.

“The impact of quads and side-by-sides on the high alpine is phenomenal,” Windermere Valley Snowmobile Society president Barry Lightfoot told The Valley Echo. “Once they drive up on the alpine, it’s done for 10 to 15 years, if not forever.”

A 1996 ban on all motorized vehicles in the area was widely ignored for years, prompting provincial officials to revise Section 58 of the Forest and Range Practices Act last fall, after consulting with various stakeholder groups.

Since these high-elevation areas are only snow-free starting in early summer, the revisions effectively keep ATV and quad riders out permanently.

According to provincial officials, protecting sensitive alpine environments and creeks, which feed Radium’s water source, was another reason for the Section 58 revisions.

The various stakeholders will soon get together to review how the first winter went with the revisions in place.

“There are still a few kinks to work out, but a step in the right direction is a good step,” said Columbia Valley Hut Society president Ryan Bavin. “We still have a ways to go, but eventually it will be a pretty good thing.”

Bavin said the fragile alpine ecosystems are much more easily impacted by ATVs in the summer than by snowmobiles in winter, adding that he hopes everybody respects the summer closures.

“The deal has been pretty good,” said Windermere Valley Snowmobile Society president Barry Lightfoot, adding that he too is concerned about off-road vehicles going into the area in the summer.

Lightfoot said those responsible for keeping such vehicles out of upper Forster Creek in the summer should be more proactive in putting up signs and putting a metal post in a critically located bridge in order to stop ATVers and quadders getting past it.

“I would like to see the summer closure held up better,” he said. “They’ve never done much to enforce it.”

The revised closures haven’t changed the number of sledders heading into upper Forster Creek much, partly because the area is hard to access, according to Lightfoot, adding that the new sledders who have gone to the area, particularly to Catamount, come back raving.

The only elite sledding experience in B.C. that can compare to being on Catamount Glacier is going to Pemberton Glacier, he said.

“Everybody has to work together,” he said.

Signs and fencing have been installed in the upper Forster Creek to inform user groups of the closure, said B.C. Ministry of Forest, Lands and Natural Resource Operations communications officer Heidi Zilkie, adding that the ministry did make compliance and enforcement efforts during the winter.

“When working with a number of groups with varying interest, it is always a challenge to get full agreement,” Zilkie said, speaking about whether or not the revised closures have been successful. “Our continued efforts will bring the groups to consensus, likely not full agreement.”

The area is part of RK Heliski’s operating tenure, but prior to the revisions the company had been mostly unable to use the area since it was frequently tracked out by sledders ignoring the original closure. This was according to RK Heliski general manager Rod Gibbons in March 2012 before the revision were made.

“They (the government) said all stakeholders need to be willing to compromise on the amount of use that they expect, to temper their expectations and accept some limitations in access,” Gibbons had told local media. “But the fact of the matter is, it is only the backcountry skiers and heli-skiers who are actually being asked to temper their expectations, because legally the snowmobilers aren’t supposed to be there in the first place. They are actually getting something out of this.”

Gibbons could not be reached by press deadline for comment on whether or not the situation had improved with the revisions.

Village of Radium Hot Springs mayor Dee Conklin said based on conversations she’s had with the managers and owners of accommodation business in Radium, sledders heading up to Forster Creek this past winter did help increase business in the village during the winter months.

“I believe next year will be a more telling tale as to the efforts that so many groups have put in to make the whole experience more enjoyable for everyone,” said Conklin.

Columbia Valley Chamber fills board of director vacancies at AGM