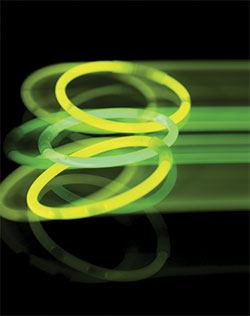 TIGHT AND BRIGHT Invermere’s Curling Club will be all aglow with a new event on Saturday, January 17th. File photo

Local curlers looking for something different may be keen on the new glow-in-the-dark curling event coming to Invermere next weekend. The event will involve black lighting, glow sticks and laser lighting in the Invermere Curling Club, and is the brainchild of Station Pub general manager Richard Matthews.

The whole premise is theres not really a ton of different things going on in Invermere in the evenings, and we thought this would be creative and different. Its going to be a lot of fun, said Mr. Matthews. Its also meant to help the curling club draw new people to the sport.

About half the lights in the curling club will be replaced with black lights, with additional illumination coming from 500 glow sticks and laser lighting provided by DJ Will C. There will be two one-hour sessions of curling, but it will be a non-competitive event, mostly just for entertainment, he added.

Its a fun event that anybody can play. In fact if youve never curled, this would be a perfect time to get your feet wet and try, said Mr. Matthews.

Participants are encouraged to wear clothing that fits the events tight and bright theme.

Were trying to get things as bright and colourful as possible in there. Anything 90s style with neon, loud shirts, headbands, fanny packs, leotards would be good, or just anything thats fun and loud.

Late Night Glow-in-the-Dark Curling is Saturday, January 17th starting at the Station Pub at 7:30 p.m. for organization of teams, rules and briefing, and the curling then starts at the curling club at about 9 p.m. and runs until 11 p.m., followed by prizes (for most outrageous costume, best team spirit, overall enthusiasm and other categories) and other entertainment in the club lounge.

Teams or individuals can register at the Station Pub (250-342-5557). The cost is $20 per person or $80 per team of four, and includes all necessary curling equipment. The event will be licensed so is only for those age 19 or older. Beer from Arrowhead Brewery will be available and there will be door and draw prizes from Syndicate Board Shop.