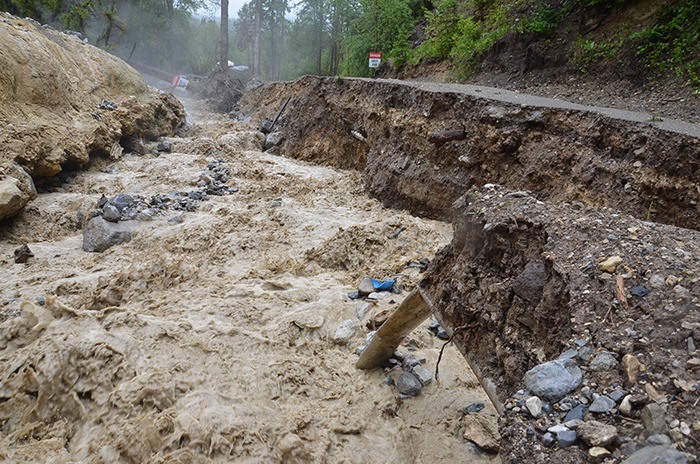 Torrential rainfall late June caused flooding, closed roads and prompted an evacuation order in the Upper Columbia Valley, but the valley was largely spared the more dramatic situations experienced elsewhere in the East and West Kootenay, in Canmore and across large swathes of Alberta.

The heavy rain started late in the night on Wednesday, July 19th. Local creeks quickly swelled with the extra precipitation and the morning of Thursday, June 20th  saw flooding in Fairmont Hot Springs and Dutch Creek. The Regional District of East Kootenay dispatched crews and declared states of local emergency in Fairmont and in the Dutch Creek area, followed by an evacuation order in Dutch Creek (which covered the Hoodoos Resort campground, the Hoodoos Grill and several homes in the area but not Dutch Creek Resort) later Thursday afternoon.

Areas north, south, west and east of the valley experienced worse rainfall and much more severe flooding, reducing most nearby major highways — including the TransCanada, Highway 93 through Kootenay National Park, Highway 3 and Highway 93/95 at both the bridge near Skookumchuck and near Wasa — to a single lane or, in many cases, closing them altogether.

For most of the afternoon and evening of Friday, June 21st the valley was almost completely cut off, with the only access in or out being northwest through Golden and over Rogers Pass, sparking concern among Upper Columbia Valley residents about fuel and food supplies running out in local gas stations and grocery stores. Most gas stations Friday afternoon had lineups at the pumps 40 vehicles long or more and the produce shelves at Sobey’s were virtually empty on Saturday, June 22nd.

Workers from John Wolfe Construction Co. Ltd., which runs the Baymag Inc.-owned magnesite mine near Settlers Road just south of Kootenay National Park, were rescued after being caught by the heavy rains and flooding.  People from Alberta and other parts of the East Kootenay, including a group of Grade 6 students who had been camping in the backcountry near Canal Flats, were temporarily stuck in the Upper Columbia Valley from Friday afternoon until Saturday morning.

By Saturday evening the regional district had rescinded the evacuation order in Dutch Creek and by Sunday, June 23rd water levels in much of the valley had either dropped or stabilized and access on the most of highways had improved or been completely restored. The regional district has received some reports of washouts, bridge closure and slides affecting or blocking backcountry and forest service roads throughout the region and was, at press time, advising extreme caution for those using these roads.

“Things look to be settling down in most areas of the region,” said regional district communications manager Loree Duczek on Monday, June 24th, adding she commends the efforts made by volunteers, emergency crews and other people involved in the responses efforts to the flooding. “It’s really an example of the community pulling together.”

The regional district has three emergency responses team and all three were in action across the East Kootenay during the flooding.

“It’s been a huge response in terms of our emergency response programs. Since I’ve been here I’ve never seen an effort so big,” said Ms. Duczek.

Although homes were affected by the flooding, nobody has actually lost a house and no injuries have been reported, she said, adding that water levels are still high and that the public should continue to exercise caution, especially in the backcountry.

“Most of the critical areas are under control. I’m extremely happy with our team’s response,” said Mr. Conley on Monday. “There’s damage to be repaired in Fairmont but what’s happened in the Columbia Valley is certainly manageable compared with what we’ve seen in other parts of the East Kootenay. We got off easy compared with those areas.”

The Springbrook bridge at Skookumchuck experienced significant scouring and will likely remain open only for single-lane alternating traffic for the better part of the week, he said.

“At this point nothing has been identified as an immediate safety issue in the Upper Columbia Valley. Mosts sites in valley are at the stage now where we can start recovery,” said Mr. Conley.

Mainroad will be replacing or potentially even upsizing a culvert in Fairmont, which contributed to flooding when it simply couldn’t keep with high water flows, some time in the relatively near future.

“We’re on it, but we need to prioritize materials at the moment for other parts of the East Kootenay that were hit a bit harder. There’s a lot of rebuilding to do in those spots. They’re not as bad as Alberta but it’s some of the most significant road damage we’ve seen in the East Kootenay in 15 to 20 years,” said Mr. Conley, adding that Mainroad had 30 trucks out in the region as a whole during the weekend and had its flaggers stretched to the limit.

“Finding the human resources to deal with all the emergencies was a challenge, we had several flaggers working 18-hour days for two or three days in a row,” he said.

The Hoodoos Resort campground had re-opened for business by Monday, June 24th.

“There has been far less damage that I had anticipated. All the trailers are safe, we lost a few decks, but nothing that can’t be replaced. We’re pretty lucky I think,” said Hoodoos Resort manager Scott Powell. “The water rose and washed away 300 feet of berm in a few hours, but it then went down and they’re now replacing it with riprap.”

“Windermere Creek is slowly filling up with gravel but there is no imminent threat,” said Shadybrook manager Mike DuBois, adding the campground tends to suffer more from gradual flooding problems rather than big rainfall events.

Kootenay National Park also fared much better than it did during last year’s floods, according to Parks Canada communications manager Omar McDadi.

“The were some effects, but they were not on the same scale as they were last year. Definitely this time around Kootenay was far less affected than other parks,” said Mr. McDadi, adding that highway 93 and several day-use areas and trails in the park were temporarily closed, due to high water levels or debris build up, but have for the most part been re-opened.

Potential for flooding-related problem in Wasa remains, since flooding high up on the Kootenay River can often take several days if not a week to affect the lower reaches of the river (south of Canal Flats).