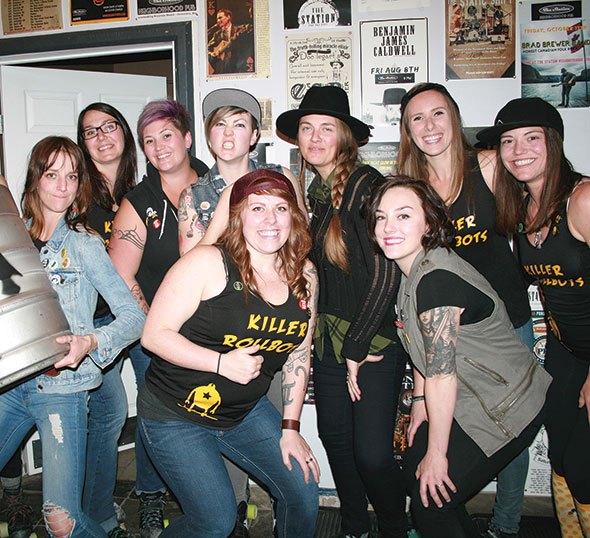 The Invermere Killer Rollbots derby team celebrated its 5th birthday party at The Station Neighbourhood Pub on Saturday, April 30th. The Rollbots first and possibly only home game of the year is happening at the Eddie on May 7th.Photo by Breanne Massey

The Invermere Killer Rollbots are back in action this weekend in what could be their only home game of the season at the Eddie Mountain Memorial Arena.

The Rollbots upcoming game on Saturday, May 7th will feature the Deathbridge Derby Dames out of Lethbridge, Alberta. To date, the two teams have yet to face one another but team captain Jess de Groot says she expects a closely fought game.

According to the statistics predictions, it should be a pretty even game so it should be really tough for both teams and have really good action, she said.

Roller derby is popular in the Columbia Valley because it combines a fun atmosphere with a high-impact, fast-paced sport.

The sport involves two teams of five players roller-skating in the same direction around a track. Gameplay consists of short matchups, called jams, in which a scoring player from both teams, called a jammer, scores points by lapping members of the opposing team.

Ms. de Groot says its the sports uniqueness that draws many within the community out to watch events like this.

Its the only competitive womens sport in the valley that people can come and watch. Its pretty gnarly to see people hitting each other and go as fast as they can on roller skates.

Our games always do well, she said. We always have lots of people come out, they drink a lot of beer and they cheer really loudly so our games are really good.

The game will start at 7:30 p.m. with doors opening at 7 p.m. Fans are invited to enjoy the bout in addition to the Arrowhead beer garden and half-time entertainment provided by Arabian Mountain Spice. Admission for adults is $10 while kids have free entry.

Multi-use construction could wrap up in May