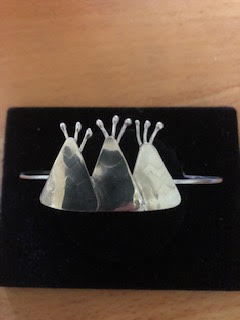 The now 63-year-old Tobacco Plains member, who is part of the Ktunaxa Nation, was 55 years old at the time made a difficult decision.

She resigned from work to mitigate the health risks that stem from working in an office with a sedentary lifestyle to focus on reducing daily stressors, developing a meal plan and implementing an exercise plan.

“I always said when I’m 50, I’m going to quit working and go to learn silverworking,” she said. “But the years just kept creeping by and creeping by, and I pushed myself into it when I got sick. Now, I really love it.”

But in 2017, after the winter’s craft fairs and Christmas markets were completed, Basil suffered from a heart attack.

“I’ll never forget it,” she said. “It was the day that Donald Trump was sworn into office as the president. I told my husband that I was going outside to work on the porch and was hammering designs on these two heart-shaped pieces for a project I was working on when I knew something was wrong, so I told him and we ended up going to Calgary for (treatment).”

But as a resilient person, Basil found positivity in the experience of taking time away from work and focused on the cathartic nature of learning how to become a silversmith and making jewelry. “When I quit work, I staved off the inevitable,” she said.

While Basil is largely self-taught, she credits a lot of what she learned to free and paid-for content to learn about silversmithing from online video tutorials as well as through trial and error. She believes it took roughly three years to gain proficiency in the artistry of becoming a silversmith, while learning how to properly sauter, create hinges and set stones.

Now, Basil focuses on creating culturally significant artwork as an Indigenous jeweller with an expansive list of products ranging from rings to earrings, and silver-plated necklaces that are one-of-a-kind.

“I try to recreate some of the items that were worn back in the early days that I’ve seen in pictures in the 1800s and 1900s, but a lot of the pieces that men wore were ceremonial,” said Basil. “A lot of the pieces that they wore daily were plain. Just straight silver discs and things like that where as ceremonial wear would have claws and feathers and teeth. They were used in the dress, so I try to recreate them and a lot of people wear them in the day-to-day, and they are appealing to the eye, so I try to recreate those patterns. It’s not for everybody but I find a lot of the younger crowd, they like the more trendier pieces that kind of follow a certain line of where there’s a lot of bling on them. I use a lot of gemstones that are made in Canada that have an Indigenous story with them.”

While the Ktunaxa were traditionally known for their intricate beadwork, it was never the art that appealed to Basil so she’s focused on incorporating culturally significant materials into her designs as a jeweller.

“The elk was, and still is, a big part of our culture, so just about everything on the elk we used (historically) in one form or another,” said Basil. “We used the hip bones to make our saddles. Elk ivory was always used for jewelry, so I’m trying to develop what I consider a Ktunaxa platform in silver jewelry.”

Members of the Ktunaxa Nation will often provide antlers, elk ivory or animal paws to Basil to incorporate into her crafts. She aims to feature plants and animals in her handcrafted jewelry.

However, Basil does not restrict her craftsmanship to Ktunaxa designs.

“Basically, a lot of it, I try to draw on the cultural aspects, even if it’s not our own,” she said. “When I make a piece with labradorite, I bring up the story of the people in labrador and the area where it’s from. They look at it as a salmon stone because the people were cast into the stone, and that’s why you get all the different colours then the people come out and play at night. That’s the aurora borealis, then they go back into the stone.”

She hopes culturally significant jewellery can help to raise awareness to the teachings of Indigenous people in Canada. 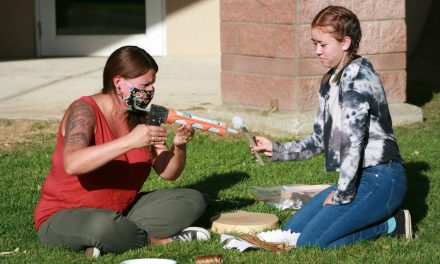 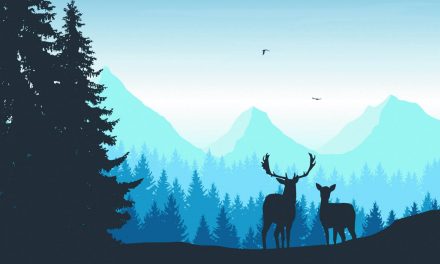