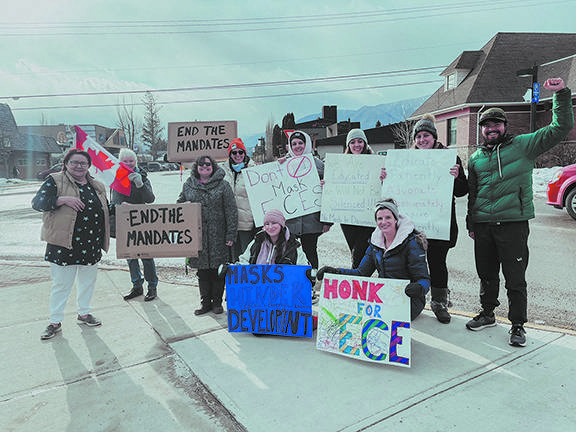 A total of 15 to 20 early childhood educators (ECEs) and concerned citizens gathered in downtown Invermere on Monday, Feb. 7 to protest mask mandates for ECEs. Photo by Heather Smythe

Several young Columbia Valley kiddos had some extra time, unplanned, out of school earlier this week, after staff at a local daycare and preschool centre protested against being mandated to wear masks.

On Monday, Feb. 7, Sonshine Children’s Centre was closed as staff gathered downtown with other concerned citizens at the main intersection of 17th Avenue and 13th Street (commonly known as Dysfunction Junction), in front of the Bank of Montreal.

The group, which numbered about 15 to 20 people, waved signs — outlining their concern about the potential negative social and emotional effects of young kids (less than one year old to five years old) not being able to fully see their caregivers’ faces — and soliciting honks of support from drivers passing by. During the 30 to 45 minutes that the Pioneer was present at the protest, roughly every third or fourth vehicle honked or flashed a thumbs up in support. A number of drivers passing by, however, also gave the protestors a thumbs down.

The following day, on Tuesday, Feb. 8, staff were set to return to work, but the board that operates the daycare opted to keep it closed to hold discussions with the staff.

The matter stems from changes to B.C. Centre for Disease Control (BCCDC) guidelines for daycare made back on Jan. 19. One of the changes required most early childhood educators (ECEs) to wear masks. In B.C., up to that point, ECEs working with preschool and daycare age kids had not been required to mask. The board that runs Sonshine — the Sonshine Children’s Center Operations Team (SCCOT) — sought clarification on some points of the changes through a ZOOM meeting with provincial health officer Dr. Bonnie Henry shortly after the Jan. 19 changes, and when that meeting didn’t touch specifically on mask, with a written question.

The board chose to hold off on implementing any changes while it waited for an answer. But by early February, with the written question still unanswered, SCCOT decided to go ahead with the changes starting on Monday, Feb. 7.

After daycare staff were notified, they requested a meeting with the board on Thursday, Feb. 3. On Friday, Feb. 4 staff sent an email to parents of kids at the daycare letting them know they would not be at work the next Monday.

Daycare staff at the protest repeatedly emphasized to the Pioneer that the protest was not about vaccines, vaccine mandates, or even about masks generally, but instead was specifically about masks in daycare and preschool settings. They also emphasized that they purposefully chose to protest at Disfunction Junction instead of at Pothole Park to explicitly disassociate their protest from other pandemic-related protests that have occurred at Pothole Park in the past two years. “We’re not opposed to masks at all. We’re opposed to masks in daycare settings,” said former Sonshine employee and longtime Invermere ECE Sandy Kalesnikoff. “Children learn to speak while watching our mouths, tongues and lips as well as listening to sounds. Masks prevent this from happening, as well as muffling the sounds.”

“If there are negative impacts, I don’t want to be an accomplice to that,” said Sonshine manager Steph Wierenga. “A big part of my job is to support the Sonshine kids as best I can, and I feel — I truly feel — that that is what I am doing by being here.”
Two other ECEs at the protest – Christine Carlow and Kaitlyn LeRoy — spoke with the Pioneer and echoed similar sentiments, saying that masking goes against their ethics as educators.

The Pioneer attempted to contact the board for comment on the protest as well as its perspective on the impacts to children of ECE wearing masks, and also sought comment from Lake Windermere Alliance Church Pastor Josh McCallum (Sonshine runs under the umbrella of the church) but was unable to reach either in the limited time available prior to deadline.

SCCOT member Thomas Reilly had, however, outlined the board’s perspective on several points in letters sent to parents of Sonshine kids, noting that a forum for parents would be held on the evening of Tuesday, Feb. 8 (after Pioneer press time, but before the newspaper was distributed in the Columbia Valley).

“At the conclusion of the Feb. 3 meeting SCCOT was of the belief that we had found an amicable resolution to this situation that would avoid childcare services being impacted. On Feb. 4th an email was sent out to parents telling them that staff would be refusing to work. SCCOT had no prior warning of this plan,” wrote Reilly in one of the letters.

He noted that using face shields, as a potential compromise to the issue, is not allowed under public health orders issued by the BCCDC, and that clear or transparent masks that cover the nose and mouth but which allow viewers to see those body parts were an allowable alternative.

“During our all staff meeting (Feb. 3) a number of accommodations were offered and staff were also notified that SCCOT had purchased clear masks,” wrote Reilly. 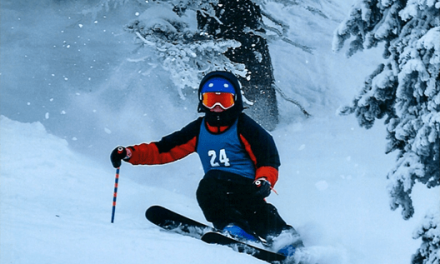 There’s no place like Dome: Winderdome Resort is now open for booking 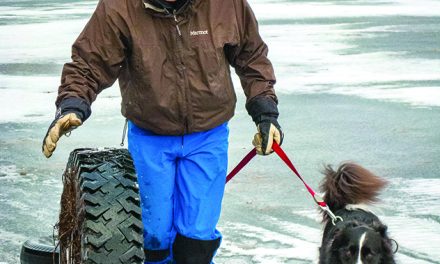