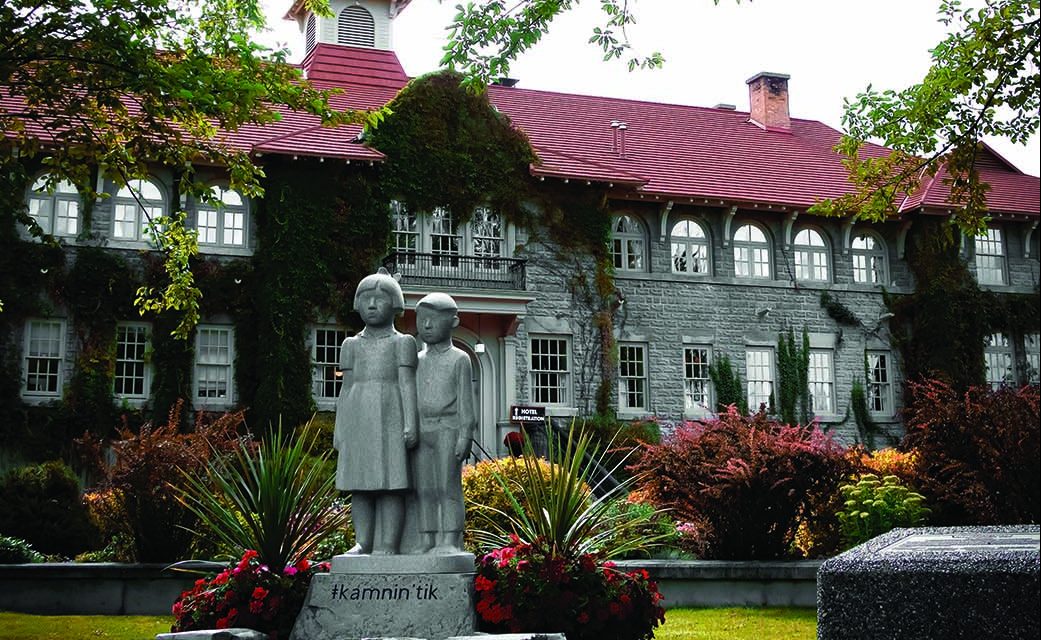 The Kootenay Indian Residential School, also known as the St. Eugene’s Mission School, near Cranbrook was run as an industrial school by the Roman Catholic church between 1912 and 1970. Ktunaxa, Secwepemc and Okangan, as well as Blackfoot children were forced to attend the school for approximately 10 out of 12 months of the year where families were split up and forced assimilation took place for decades. Photo by Blaine Burgoyne

The decision to close the Kootenay Indian Residential School near Cranbrook in 1970 changed the region forever.

But the lasting effects of intergenerational trauma have lingered in the hearts of survivors, the homes of their families and in the communities who have collectively lost ties to their traditional languages and cultures.

“Personally, it had affected my family deeply,” explained Shuswap Indian Band (SIB) Chief Barbara Cote wrote to the Pioneer by e-mail. “My mother was a residential school survivor and had many sad stories she shared with us. It would take them three days to go by buggy, and there was a corner they got to where they could see St. Eugene’s Mission School and they called it the wailing corner, because that was when she and her four siblings would start crying as they knew they wouldn’t see their mom for 10 months. Their mom would make them new clothes and moccasins for their first day of school, and when they got to school, their hair was cut and they were given uniforms. When June came around to go home, their clothes were too small for them. My mother was abused at the school, and this led to hiding her pain with alcohol until she was 46 and it was really tough for us, four, children as we never knew what we were coming home to. When she became sober, she was the most wonderful mother and grandmother. She was so positive and happy and all that met her instantly loved her.”

National crimes rooted in colonialism and assimilation were etched into Canadian history forever when Métis, First Nations and Inuit children were forcibly removed from their families to attend residential schools in spite of the high mortality rates.

There were at least 22 residential schools mandated by the Government of Canada distributed throughout the province of B.C. and operated by the Roman Catholic, Methodist, Anglican, Presbyterian, and the United Churches of Canada. It is estimated that 150,000 Indigenous children were forcibly removed from their Canadian homes and their communities by law enforcement where many survivors report physical, emotional, sexual, psychological and spiritual abuse which has deprived many from pursuing their cultural traditions.

“It’s hard for someone like me to watch our parents of Residential School Trauma, knowing lots of our Ktunaxa Nation members have turned to alcohol / drugs to help ease the pain they were put through in the times the St. Eugene Mission was open,”  Akisqnuk First Nation Chief Ryan Nicholas wrote to the Pioneer by e-mail. “Knowing my generation will not see the Ktunaxa Nation recover from the abuse received by the Priests and the Nuns in the St. Eugene’s Mission.”

The St. Eugene Mission School, also known as the Kootenay Indian Residential School near Cranbrook, was run by the Roman Catholic church as an industrial school  between ~1912 and 1970.

“The Schools were formed to try and erase our traditional way from our Ktunaxa People and other First Nations,” added Nicholas. “It will take up to seven generations to bring all the Traditional ways and languages back as strong as they were before the St. Eugene Mission was opened. I know lots of the elders that went to the St. Eugene’s Mission (who) won’t even go into the hotel and casino. Some won’t stay in the main mission part of the hotel either, they will only stay in the newly added part of hotel. As the next generation, after the Missions were closed, it’s up to us to bring the matters of our parents forward and to start the healing process for future generations to continue on, while moving forward for the Survival of our Ktunaxa People and First Nation all over Canada.”

Métis Nation of B.C. (MNBC) Kootenay-elected board member Debra Fisher could not be reached before the Pioneer went to press.

The Truth and Reconciliation Report Commission of Canada completed as a part of the Indian Residential Schools (IRS) Settlement Agreement which began on September 19, 2007. The purpose of the six-year-long IRS was to document the realities of survivors, families, communities along with those from churches, former school employees, the government and all Canadians affected by the residential school system.

Through the report, approximately 6,750 survivor and witness statements were taken from across the nation, reporting more than a century of abuse at the IRS. In an effort to advance the process of reconciliation, TRC chair Justice Murray Sinclair Presented 94 calls to action to address the legacy of rampant abuse and forced assimilation by urging all Canadians to protect child welfare, preserve traditional languages and culture, promote legal equity and strengthen information about missing children.

Moving forward, some of the survivors and those affected by intergenerational trauma, hope to look ahead and focus on the future.

“My hope for the future of families who are commemorating the 50th (anniversary of the closure of the Kootenay Indian Residential School this summer) is that we can forgive and that the truth comes out at last,” said Cote. “There were three generations in my family that were taken away and not allowed to practise our culture and language. I hope we can have this celebration this summer and take our children and grand-children to be part of their families’ past, and that we celebrate our past to see how we have survived and continue to learn and teach our future generations on being proud of who they are.”