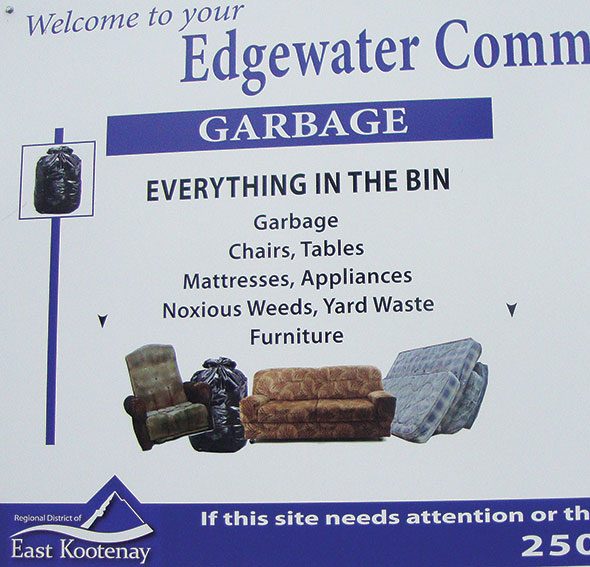 I found the article (Use it properly or lose it: valley transfer stations) in the September 4th 2015 issue of The Pioneer well-intended, but lacking in detail. I, too, have been frustrated by the seeming lack of concern by the users of the Edgewater site.

I have found the bin to be jammed with dimensional lumber from apparent construction waste in recent weeks.

It was clear that the operator would have to climb in the bin to realign the lumber to allow the bin to be pulled clear of the shed for removal and dumping.

My sincere sympathies to the operator tasked with climbing into a garbage bin filled with god-knows-what because of someones lack of thought.

I am sure most of your readers have been on the receiving end of such individuals, but for the most part, most try to follow the rules. That brings me to the point of this letter.

It does not help the situation when, in large print (see above photo), the sign indicates everything in the bin with the post script (small print) including items such as yard waste, contrary to the comments of Mr. Paterson.

Practicing due diligence, I read the signage and, yes, I dumped my bag of grass clippings in the bin along with a few tree branches.

Now after reading the article in your paper, my conscience bothers me, perhaps more than those responsible for the signage.

Is poaching really the problem?

Chamber is correct about mini-Mac