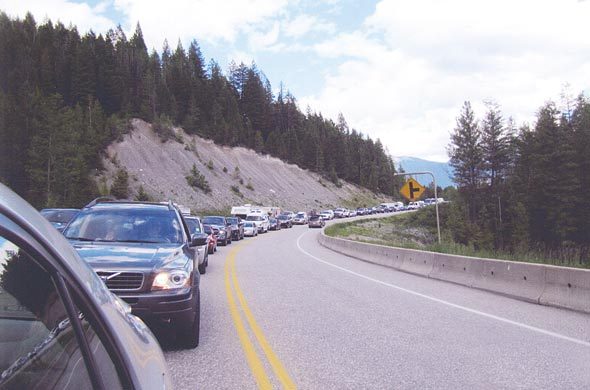 JAM Ray Crooks perspective from his vehicle, looking back towards the Kootenay Valley Viewpoint in Kootenay National Park.

On the afternoon of Saturday, July 23rd, I drove east on Highway 93 through Kootneay National Park to see the previous days accident site wet of Olive Lake where the California family of four lost their lives.

Eastbound traffic was about average, but westbound it was bumper-to-bumper. I turned around at the Kootenay Valley Viewpoint and managed to join the traffic going west. It was start and stop all the way back to the junction in Radium.

It took three hours and 10 minutes to drive the 15.2 kilometres.

Editors note: the four-way stop in Radium experienced an unusual barrage of traffic on July 23rd, due to the closure of the highway through Yoho National Park.

A mudslide covered the highway, and forced all traffic to detour through Radium. Driving from Edgewater to Radium normally an eight-minute drive took one hour, motorists reported. Drivers also reported that traffic was brought to a standstill as far back as Settlers Road in Kootenay National Park.

Offer French at both schools

Wings over the Rockies