During the most recent Invermere council meeting, council members discussed how the photovoltaic solar panels on the new multi-use centre that’s currently under construction may not be quite as tilted or as south-facing as some people involved with project may have originally expected.

The matter was brought up at the Tuesday, September 13th meeting by Councillor Paul Denchuk, who said there may be some confusion about whether or not something had been missed, and asked whether or not it was still possible — as had been envisioned — that the whole roof of the main part of the building can be filled with solar panels.

Invermere chief administrative officer Chris Prosser responded that through talking with the structural enginee rand architect, it is clear that between the roof of the centre’s main building and library it will be possible to have the 135 to 150 solar panels that council and other members of the multi-use centre’s steering committee had wanted, but that there seemed to have been some miscommunication somewhere along the line.

“It has been a long debate since June. Every time we thought we had it solved, the structural engineers or the architects brought up another issue,” said Prosser. “It caught us (district staff) off guard, because during the conceptual design process we had always talked about being ‘solar ready’ and it was never a problem, and then in a phone meeting the structural engineers said ‘no’.”

Prosser added he’s been told by the structural engineers and architects that the solar panels, however, may be limited in how much they can tilt and may not be able to face south.

Invermere mayor Gerry Taft said that perhaps the steering committee had not specifically outlined how much it hoped the solar panels would be able to tilt, or that they should be south-facing, but he added that when talking about solar panels, it’s hard to imagine them not being able to tilt up and face south so as to maximize the amount of energy they can produce.

Denchuck said that, from what he understands, there may not actually be much gained from tilting photovoltaic solar panels in this region, and that it might not be worth the extra cost associated.

“So in some respects, I actually feel a bit better about having them flat,” he said, citing not only the extra costand the aesthetic appearance of the centre, but also that “(the centre) is right in a wind line there, and some of those panels could be ripped off.”

In the end, the council members agreed that a potential bullet — not being able to have solar panels at all —had been dodged.

Tour of the Arts concentrating talent at CPR Lodge 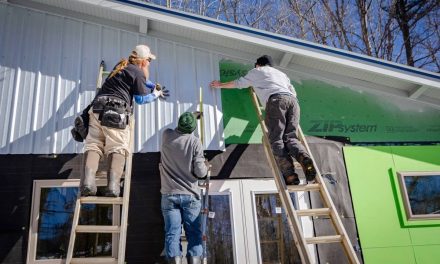