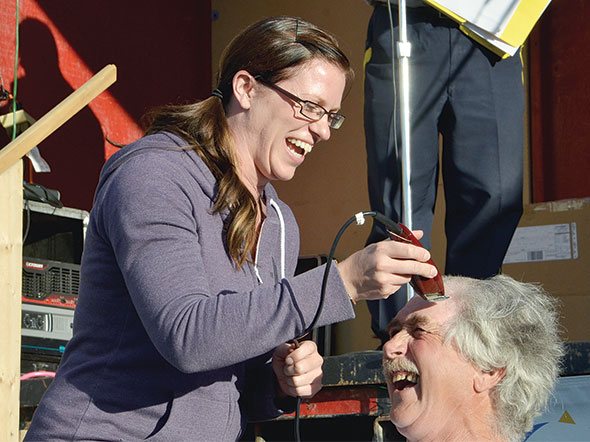 Frank Kirby raised $1,500 for cancer research at last year’s 2013 Relay for Life. This year, he wants to double that. File photo

Since shaving it last at the 2013 Relay for Life, Frank Kirkbys hair has spent a year growing back to again support the Canadian Cancer Society.

This will be his fourth year going bald for cancer. Frank first shaved his head as a fundraiser during his final year as president of the Kinsmen Club, which was performed at the clubs trade show.

Being tongue-in-cheek, I decided to call it My Parting Clip, he said.

In the two years to follow, Frank took his overgrown hair which was never cut over the off-season and brought it to the Columbia Valley Relay for Life.

But this years Parting Clip wont happen at the same location. Local organizers for the Relay for Life have taken their fundraising initiatives in a new direction, and will not be hosting the relay in 2014. Without a venue for Frank to use as a fundraising platform, the owners at his workplace the Valley Alley have generously offered the building to serve as the home for Franks 2014 Parting Clip. The Valley Alley will be holding the event on Friday, May 9th, beginning the shavings at 3 p.m. And a few other donors will also be shedding their fur, including the Valley Alley owner Brian Chemelli, he said. With his hair now nearing his shoulders, Franks beard has been growing almost as long, and will also face the blade.

My facial hair is pretty dog-gone close to a years growth; it might be a month short, he said. Parting with that much hair will take some getting-used-to, he added. Lets just say Ill have to sleep with a toque on at night.

He raised $1,500 last year for the cause, and this year, hes feeling twice as ambitious. This year Im trying for $3,000, which is a really big goal I realize, considering that theres no Relay for Life and there are a lot of people doing other things, but thats the goal.

Attendance is free, and spectators are also welcome to eat barbecue hot dogs and have refreshments by donation.

Darn right itll be a good time, he said.