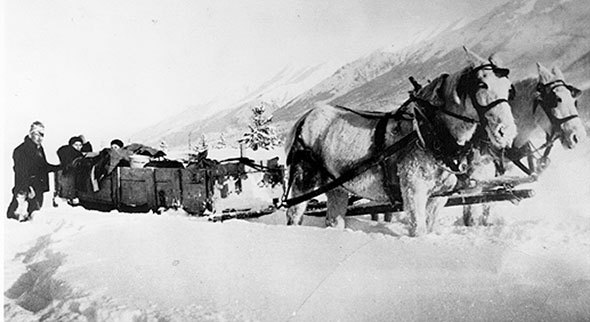 The photo of the team of horses and sleigh are Frank Richter, his wife Helen and their kids bundled up under the blankets. It is taken on the Settlers Trail, now known as Settlers Road. Mitchell Ridge is in the background because they are parked along side the Kootenay River near the south end of Kootenay Park. They are travelling into their homestead, which is now Nipika Mountain Resort.

Editors note: Sanda Taylor called The Pioneer to say she was one of the children in the sleigh. I was quite young, I might have been five or six. All I remember about that particular time was that it was -30C and I was told to keep my head under the old wool blanket, which would scratch your nose when you were breathing. I remember being under the blanket with my younger sister and my mom. My dad was the person standing on the far left. It was taken in the 1930s by Bob Tegart. He was a guide in those days and owned the horses and sleigh. We had to get a grubstake (supplies) to our home (now Nipika) and there were three to four feet of snow. Then there was a cable car system across Kootenay River and we had to walk a quarter mile to get to the house. I have the actual photo framed in my home.

Commerce in Canada isnt all that bad

Provincial park funding is an embarrassment

Former resident speaks out against homophobia