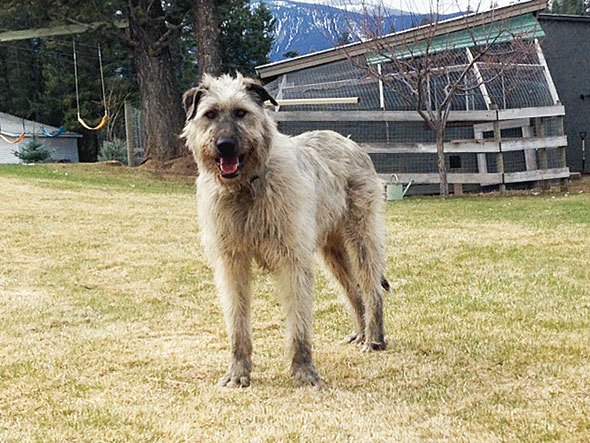 RECOVERED RESCUE Oliver, a rescue dog seized from the Alberta property where more than 200 abused dogs were discovered earlier this year, has found health and a home in Invermere. Photo submitted

The first time we let him off the leash, like a thoroughbred, he just ran and ran and ran.

Such was the time when Oliver, an Irish Wolfhound, likely felt his first rush of freedom. Jocelyn Brunner recounted this story when discussing the most recent addition to her already large family. With a husband, three daughters (aged 7, 5 and 3), 25 chickens, two cats, and a golden-aged Airedale, Oliver was nonetheless welcomed with wide-open arms.

Oliver was among the 201 distressed dogs removed from April Irvings property in Milk River, Alberta in January. The living conditions for the dogs were devastating and, as many may recall, made national news. Over the winter holidays, when authorities performed their initial raid, sadly they found several deceased dogs among the many that were severely malnourished (criminal charges were eventually laid).

For Jocelyn, that day in mid-February could not have come sooner. Ever since first seeing his picture on the AARCS website, they knew they wanted him. Male Irish Wolfhounds have an average weight between 140 and 180 pounds, and thus require a lot of living space. The Brunners live on an acre and a half, and immediately knew that a perfect union was in the cards.

When they first received him, he was extraordinarily shy, never the least bit aggressive, and his tail could only be found between his legs. However, despite his reticence and seemingly poor condition, local veterinarian Dr. Mark Zehnder assessed his health to be in relatively good order. In addressing his then stick-thin frame, Dr. Zehnder recommended a daily feeding regime of nine canola oil-covered cups of food (the oil to accelerate weight gain); three more than the Irish Wolfhound average. Eight weeks of care later, Oliver is 30 pounds heavier and his food intake is down to normal levels. Still, though, at roughly 110 pounds, he is smaller than his breeds average. Whether he will continue to grow is hard to say. His precise age is unknown, but thought to be somewhere between one and two.

Olivers most dramatic improvement is in his spirits. Already, a strong bond has formed between Oliver and the Brunner children. Ireland, the eldest daughter, lets him out of his pen every morning with Oliver trotting for as long as he can beside her. His tail is often found wagging, and he has become much more playful and puppy-like; hide-and-seek being a favourite game.

But even with all of his progress, there is still room for improvement. Around strangers, Oliver will revert to being nervous and shy. One time, Jocelyn recalled, I took him for a walk to pick up my car from the mechanic, and he wouldnt even go near the workers. In new situations, he still doesnt do well and gets super stressed. Given the amount of progress hes made though, I am sure, with time, hell grow more comfortable around strangers.

Overall, adopting Oliver has changed the Brunners view on pet ownership. Although they have always been dog owners, theyve never adopted a rescue dog. Now, Jocelyn says they wouldnt think of doing it any 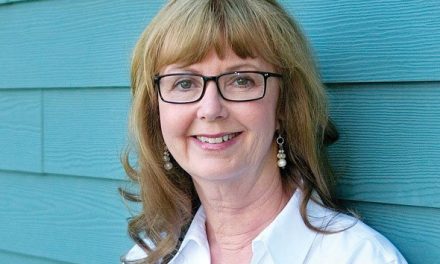 B.C.’s rising sector could be opportunity for the Valley