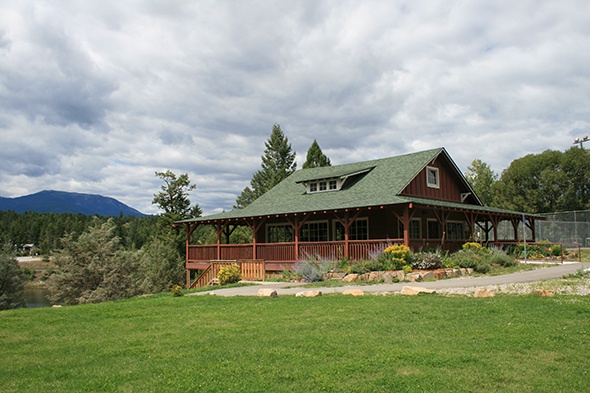 BRINGING HISTORY TO LIFE The seventh, and final stop, of the Downtown Historical walk known as Route 1 ends at the Canadian Pacific Railway (CPR) Lodge, which was built in 1920 to boost tourism numbers with cabins and a central lodge. Now, it’s a popular venue for social gatherings in the valley after several major transformations. Photo by Breanne Massey

Walkers, cyclists and runners may have some new terrain to tread over the summer thanks to the newly developed Invermere Trail System.

There are six gravel and asphalt walking trails totalling approximately 10 kilometres in length being developed with funding from the District of Invermere (DOI), Imagine Invermere and the Federal Gas Tax Fund (GTF) to highlight the communitys vibrant heritage and the outdoors.

It was a multi-stage project, said Rory Hromadnik, DOIs Director of Development Services. We received some grant money from the province and some federal grant money as well, through the GTF about three or four years ago now, to do some pathways in the community.

He added the first phase of the project aims to connect the downtown core of Invermere to the school areas to help families avoid rush hour traffic by creating alternate routes to help keep kids safe.

We wanted to get kids off of the road, creating separate pathways up on 13th (Street) and establishing loops downtown to connect the schools and residential areas, said Mr. Hromadnik. That was the focus.

Later, the Imagine Invermere organization partnered with the DOI to create additional sustainable projects to improve the community.

One of the (initiatives) that was identified early on was to focus on the trail systems and the signage associated with it, he said. That task fell to myself so I worked with a local designer, Will McKenzie, to create graphics and help identify some options.

Their goal was to create loops that would be accessible to hikers, bikers and runners while featuring the valleys history.

We used the trails that we built, and then we established six different routes that we put up signage on with two marshalling points, said Mr. Hromadnik.

There are maps located at both Pothole Park and Mount Nelson Athletic Park that show different paths to take. We named each route (and Tony Barryman) created historical stories about each route (to be included in the pamphlets for the trips) with points of interest.

Mr. Hromadnik remains optimistic the pamphlets for the project will be available to everyone tentatively around the August long weekend. He also hopes there will be an opportunity to expand the project with help from the Columbia Valley Greenways Trail Alliance and business sponsorships.

We tried to make (the trails) as accessible as possible, said Mr. Hromadnik, noting the project is still missing some signage work. The problem is that it takes money, so we bite off what we can chew annually. We found some money for the pamphlets so those are being done.

The maps will be available over the August long weekend at the tourism kiosk in downtown Invermere, at the Columbia Valley Chamber of Commerce on Highway 93/95 and at the DOI office.