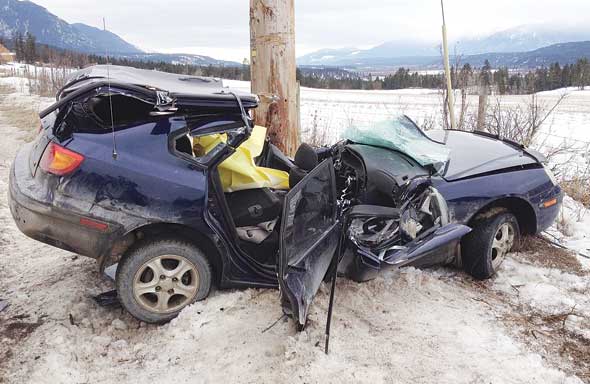 CRUSHED Matthew Kopps vehicle, after it smashed into a power pole and Matthew was cut free from the wreckage. Photo by Columbia Valley RCMP

Matthew Kopp took his eyes off the road for a split second just a brief moment to unzip a ski bag and paid dearly when the car he was driving flipped roof-first into a power pole.

March 10th was a typical Saturday morning for 18-year-old Matthew, who was driving from his home in Edgewater to the Fairmont Ski Hill, where he works as a ski instructor. Just before 8:30 a.m., driving the speed limit on good roads, Matthew reached across to the passenger seat to unzip his ski bag to let his ski boots warm up.

In the small instant he took his eyes from the road, he drifted slightly to the right and the front wheel of his car dipped into the shoulder of the highway, which was soft with spring melt conditions. The car fishtailed and flipped, slamming into a power pole a few kilometres south of Edgewater. The roof of the navy blue 2002 Hyundai Elantra absorbed the brunt of the impact and caved in around Matthew, pinning him inside the crushed car.

The car behind Matthew, carrying a person from Alberta, immediately pulled over at the scene and tried to help. A first responder team from Edgewater raced to the scene, along with ambulance attendants Kathy Horvath and Peter Hecher, and two members of the Columbia Valley RCMP. They found the Grade 12 student trapped and initially unconscious, but miraculously, alive.

When I attended and saw the vehicle, I believed it was going to be a fatal accident, said Constable Chris Ralph of the Columbia Valley RCMP.

Meanwhile, Matthews neighbour, Mark Smith, was driving past the crash scene and with a sinking feeling, thought he recognized the vehicle. He phoned his wife Tara at home and asked if she could see the vehicle in the Kopps driveway. She could not.

Mark drove straight to Matthews house where he lives with his parents, David Thompson Secondary School teacher Werner Kopp, and Louise Nicholson, who works as a nurse at the hospital in Invermere.

I heard a knock at the door, and Mark was there, as pale as I have ever seen him, Mr. Kopp said. He told me, Werner, Matthew has been in a bad accident, and you need to come with me.

With Louise away at a conference in Kelowna, Mr. Kopp rushed to the accident scene and was overcome with what he saw.

Pinned against the drivers seat by the cars pancaked roof, Matthew had to be cut from the wreckage by Invermere Fire Rescue and the Jaws of Life. He was transported to the Invermere District Hospital, where he was treated for only minor injuries.

Calling the experience every parents worst nightmare, Mr. Kopp said, Its really a miraculous thing that he lived. I could have been arranging a funeral today. Not knowing whether he was alive or dead was just terrible.

Though shaken and a little embarrassed by the accident, Matthew immediately took to the Internet and posted photos of the crash on Facebook, warning all his friends to not be distracted when they drive.

Mr. Kopp spoke about the story and showed photos of it to an assembly of students at the high school, where by coincidence students were having a guest presentation by ICBC on the Monday following Matthews crash about distracted driving.

The message I want to share is that youve got to be 100 per cent focused when youre driving, Mr. Kopp said. He looked over for just a split second, and that could have easily cost him his life. He wasnt drinking, the roads werent bad, he wasnt talking on a cell phone he doesnt even own a cell phone he just took his eyes off the road for a moment.

In this valley, we are touched by so many traffic accidents. Ive seen people from our school die in car crashes, and its a horrific thing. Its the worst thing that could possibly happen. But you never think it can happen to you but it can. With the snap of a finger.

Everyone he talked to at the accident scene told him Matthew should have been dead, Mr. Kopp said. Without his seatbelt, which he was wearing, there is no question in my mind that he would be gone … I know that for the rest of his life he will remember this lesson.

According to ICBC, an average of 117 people die each year in B.C. and 1,400 are sent to hospital because drivers were not paying attention behind the wheel. 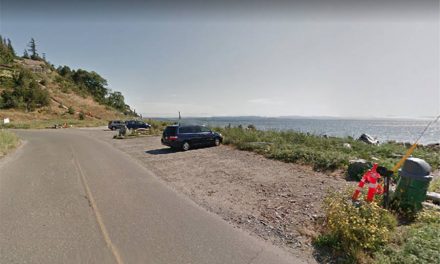 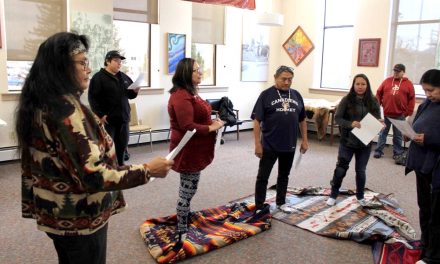