A trail of evidence between Findlay Creek Forest Service Road and Findlay Creek is suggesting an automobile accident contributed to the disappearance of 18-year-old Stephen Thomson from Canal Flats and 21-year-old Nicholas Hoefnagels of Cochrane, Alberta.

After a trip into town at 2:30 p.m. on Saturday, June 8th, the two men failed to return to their Whitetail Lake campsite and were reported missing to the Kimberley RCMP at 3 a.m. on Sunday.

Search and Rescue teams from throughout the valley joined the RCMP in their efforts which began Sunday, June 9th at 6 a.m. Hours later, at one point along Findlay Creek Forest Service Road, crews observed a precipice beside the road where a vehicle had travelled down, presumably into Findlay Creek. While items of the mens personal belongings were discovered by SAR rope teams between the road and the creek, neither of the men nor the red Chevy pickup truck they were driving had turned up as of press time on Wednesday, June 12th.

Search and Rescue volunteers have concluded their initial response, but an RCMP helicopter was used in the search earlier this week on June 10th, 11th and 12th, Kimberley RCMP Corporal Chris Newel told The Pioneer, and said crews can now only wait and monitor the water, as visibility and access are limited by high waters and rough terrain.

The water level is really not conducive to searching and were just in the midst of evaluating and monitoring the streamflow and the turbidity of the water, he said. Were continually monitoring, but unfortunately we dont expect the water to drop and clear up for a while, but that doesnt mean were not going to keep an eye on it. 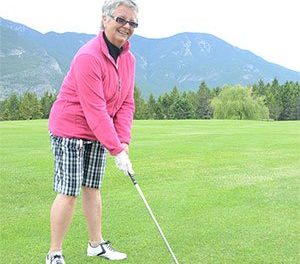