Travel World will give a night at a Calgary hotel and two Calgary Flames game tickets to the Pioneer Travel Photo Contest winner. Simply take a snap of The Pioneer on vacation with you and send it in. At the end of the year, we will draw the winning name.

Hoping to land a big one, Invermeres Brad and Christine Malfair took the Pioneer on an off-shore fishing charter 48 kilometers off the coast of Quepos, Costa Rica in April. Seems it brought them luck when they landed this 35 lb dorado (also known as a Mahi-Mahi)

Lorne and Diane Kochorek relax at the Tiki Bar in Clermont, Florida in April. 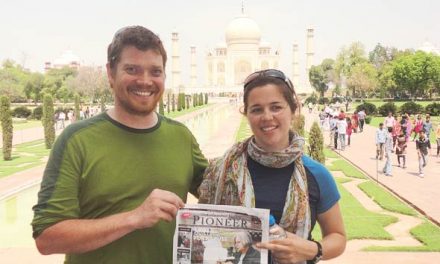