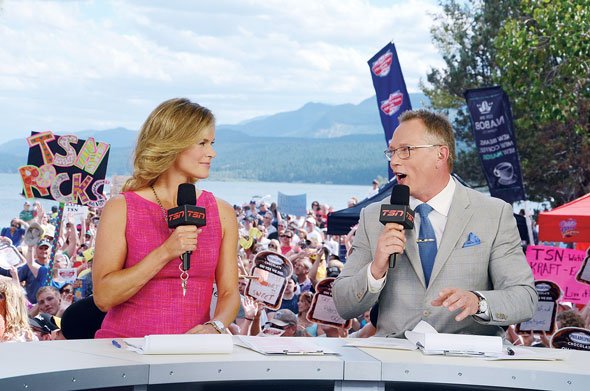 LAKE IN THE LIMELIGHT – TSN SportsCentre co-hosts Jennifer Hedger (left) and Darren Dutchyshen (right) were all smiles on Monday afternoon (August 19th) while broadcasting live from Kinsmen Beach in Invermere.Photo by Dan Walton

The nation received its sports news from Invermere on Monday, August 19th, as Kraft and The Sports Network (TSN) rolled into town to host a live SportsCentre broadcast in front of Lake Windermere at Kinsmen Beach.

The broadcast was part of the 2013 Kraft Celebration Tour, where Invermere was scheduled as the fourth stop in their cross-country tour with ten different locations. Invermere won hosting rights for the event after voters threw massive support towards Invermere during a head-to-head matchup against Pemberton.

You would be hard pressed to find a better backdrop than this literally anywhere in the world,

commented host Darren Dutchyshen during the broadcast, which got rolling at 4 p.m. after two hours of kids activities and vendors sharing their goods on the beach.

Along with the live SportsCentre broadcast, the win also included a $25,000 donation from Kraft, which supports the Rotary Clubs plans for a Splash and Spray Park at the Kinsmen Beach.

Asked how Invermere measured up to their other tour stops, SportsCentre co-host Jennifer Hedger told The Pioneer You can never say you have a favourite but I dont think well do better than this as far as the set is concerned. With the mountains, the lake, and it was a beautiful sunny day with the boats out there itll be hard to do better than that.

Ms. Hedger name-dropped some of the valleys famous athletes during the broadcast, noting Ben Thomsen, Doug Anakin, and Wade Dubielewicz or Doobie, as Mr. Dutchyshen commented are

Before TSN brought its studio to Invermere, they had producers visit and prepare an inspirational story about an encouraging local. To commemorate one of the valleys athletic legacies, 69-year-old Bruce Stroud was featured on the program for founding the Heart of the Rockies Triathlon. The anchors gave a brief history of the event, and mentioned the long-standing coveted prize a 20-ounce beer mug.

Look at the day. Thats all it takes, Mr. Stroud said about the event. Its exactly the way its supposed to be.

The SportsCentre hosts mentioned their recent visit atop Mount Swansea, where they were lead by Max Fanderl and Penny Powers.

little different from my idea of a little walk to the top, said Ms. Hedger.We drove up that logging, mining road, which was a super bumpy ride. And Im not great with heights, so to be driving up there and to be looking at that huge dropoff it was a little unnerving for me. But it was worth it. And that little bench that was at the top of Mount Swansea, it was so cool to sit up there.

To wrap up the day, Mr. Dutchyshen and Ms.

Hedger made themselves available for photos and autographs following the taping of the episode.

I dont think we could have had it any better it was perfect, said Rotarian Darrell Smith, the local

organizing chair for the event. I think we got a lot of promotion beyond just a TV show.

Mr. Smith noted the production crew members were quite impressed with the community.

Even the first bunch of people who started getting the groundwork done, theyve been raving about our community ever since, he said.

Its a huge showcase for our community, Rotary Club past president Barb Smith told The Pioneer. We know we live in paradise, but not everyone else out there does, so this way we can get out on national television how great it is to live and visit here.

Shane Goodwin, originally from Australia but now living in Calgary and part-time at Panorama Mountain Village, said the live broadcast was a thrill.

I thought it was really cool; I havent seen that before, he said. But the $25,000 to the splash park and seeing the community come out was the best part.

The weather just turned on; it was a bit dodgy earlier, but it turned out really nice in the end, he added.

But not everybody agreed about what was the best part; to Tate Goodwin, the free food was the best

reason to take in the events on the lakeshore.

Before SportsCentre went to air, there was an on-stage presentation for the $25,000 cheque from Kraft. Representing all levels of government, KootenayColumbia MP David Wilks, Columbia ValleyRevelstoke MLA Norm Macdonald, and Invermere Mayor Gerry Taft were all part of the presentation.

Prior to the donation from Kraft, the Rotary Club received $50,000 from Panorama